We took a trip into Schagen today and showed the girls where we were married!  I’ll have to go back and find some photos of our wedding and do another post soon, as it really was a fairytale wedding – I rode in on a horse and we were married in Slot Schagen.  I’d also like to look into the history of it again and write about it, but for now here is a photo of the girls in front of one of the towers:

I loved listening to their conversations – they are at the age where they love fairytales and as they haven’t really seen many “real” castles, the sight of this sparked their imagination.  They wanted to go inside but it was shut…so they decided that it was either the wicked witch or the dragon that had locked the door!

We also organised our health insurance while we were in Schagen – it is compulsory for all Dutch citizens to have private health insurance and (yet another post to research and write!) there are a large number of options, which I remember from looking into it when we lived here before.  This time I left it for Bas to arrange and he went with the same company we used before – Unive.  We need to take proof of residency (so went via the Gementee again to get a certificate of inschrijving).  While Bas sorted it out, the girls and I explored Schagen, and made friends with some sheep:

I’d forgotten that most shops are shut on a Monday morning, except the grocery stores.  We went to get a few things at Albert Heijn.  The girls really enjoyed helping out with a basket trolley each. 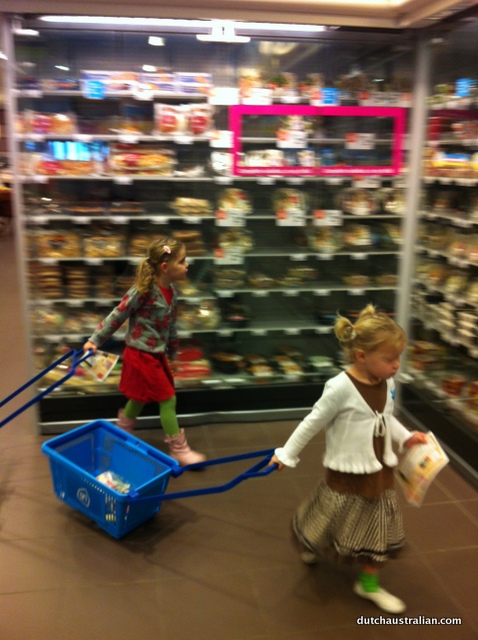 It’s still quite cool and we didn’t bring a lot of clothes on the plane with us and the shipment doesn’t come until next week.  So my sisters-in-law kindly gave us some from their girls, I’m lucky they have great taste! 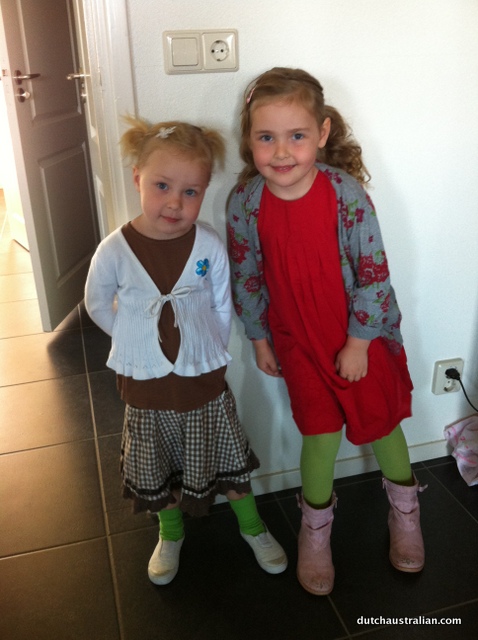 This afternoon I set up a little “office” upstairs where we are staying, until now I’ve been just sitting downstairs at the kitchen table with the computer but it’s nice to have my own little space upstairs to spread out a bit and not have to pack up the computer all the time.  Oh and to have a bit of quite occasionally to write while the girls are playing – and I can still see them outside!

The kids (girls cousins) are in school for one more week then have school holidays.  Some areas of The Netherlands already have holidays – they stagger it throughout the country.  I can’t believe my baby girl will be starting school after the summer holidays!  I know she doesn’t need a uniform but asked Bas if she has a book list or anything – apparently not, she just turns up on the first day!  Also don’t even need to pack her a lunch – as she’ll be home for lunch each day.  It’s going to be strange to get into that routine, but first need to sort out where we’re going to live etc, for now will try and enjoy the “holidays”.

To read the rest of the posts in this series, head on over to Life in The Netherlands