The Centre for International Heritage Activities is collecting information in Australia to catalogue the history and connections between the Australia and The Netherlands.

Tip #1 for learning Dutch: use a song

When learning Dutch (Nederlands), I found one great method was to find a song I liked and listen to it over and over. If it’s something you enjoy the sound of then it’s not difficult to do, and just like learning songs in your native language (English for me), the rhythm helps the words stay in your head (even get stuck there sometimes)!

Holland Focus is a fantastic magazine and website that anyone with Dutch/Australian connections should know about!

Brisbane – a city of culture

As someone who was born in Brisbane (more than 35 years ago now) and having lived here for the bulk of my life, I have the right to be objective about the city. It wasn’t so many years ago that Brisbane used to be known as a city seriously lacking “culture”. However that has now most definately changed.

What began as a routine shopping trip became a little more adventurous yesterday. On Dohles Rocks Road, Murrumba Downs (near the Tavern), traffic was at a standstill and it wasn’t just the ongoing roadworks – a small koala was running across the road, dodging cars. This is the story of the rescue of a koala that was named Renee…with a lovely surprise ending. 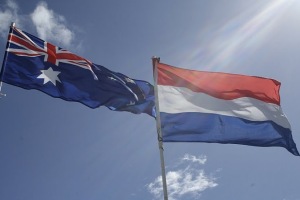 This blog is to be a collection of my experiences and I hope to also gather stories of others in similar situations about either becoming a dual national, or having connections between the Dutch and Australian cultures. I will write predominately in English, being my native language, though I’m fairly fluent now in Dutch – I can read and speak it well, though am not very confident expressing myself in writing in het Nederlands….though perhaps I can use this blog to try and change that!

I was a volunteer at ACCESS in 2006 and helped establish a “Welcome to The Hague” programme in conjunction with the Gemeente Den Haag (city of The Hague). 25 April 2006 26 September 2006 NRC Handelsblad Article

Australians in The Netherlands »

Moving to The Netherlands »