What began as a routine shopping trip became a little more adventurous yesterday.  On Dohles Rocks Road, Murrumba Downs (near the Tavern), just north of Brisbane, Australia, traffic was at a standstill and it wasn’t just the ongoing roadworks – a small koala was running across the road, dodging cars.

Just recently I had seen a brochure for the Moreton Bay Koala Rescue, which Sophia (my 3 year old) had picked up as she is crazy about koalas (it was one of her first words!).  Funnily enough I’d had that brochure sitting in my car for weeks and had just taken it out days before.  I pulled over, googled the Rescue service on my iPhone and called.

I was diverted to the Wildlife Hospital at Australia Zoo and a lovely lady, Michelle, talked me through what to do.  Two other people had stopped and helped usher the koala out of the way of the traffic, and he was now trying to climb up a small bougainvillea bush outside someone’s driveway.  One of the other rescuers who stopped, Richard, had a flexible bucket, rope and horse saddle blanket in his car.  Under Michelle’s direction, we used these to carefully capture the frightened koala.  One of his eyes was milky and looked like he had trouble seeing, and generally looked quite unhealthy and traumatised.

Michelle asked if it was possible to take the koala to my place and keep him in my laundry while they came to collect him.  Living only a few minutes away and not seeing any better alternative, I was happy to help.  I also thought it was going to be an amazing surprise for my Dutch parents-in-law who are staying with us!  However there was the dilemma of whether he would stay in the bucket while I was driving, so Richard suggested putting him in the boot for the few minute’s drive.  I opened the part in between the back seats so he could get enough air and drove off.

Just seconds up the road, I spotted a police car on the side of the road so pulled over as I was worried the koala wasn’t getting enough air.  I was also concerned he may try to escape through the gap into the car, which would have been rather dramatic, especially as I was driving on my own.  It was rather funny watching the two tall strong police men very cautiously open my boot.  “Koalas have very sharp claws,” one of them said, sounding like he may have known this from personal experience!  The police said they would take the koala back to North Lakes police station and contact Koala Rescue. Meanwhile, Ann from Moreton Bay Koala Rescue rang me (the Wildlife Hospital had passed on my number).  I let her know the koala just went for a ride in the police car – probably much more comfortable than my boot.

Not long afterwards, I received a call from the police station that the koala had been collected and that “he” was actually a “she”.  She was doing ok and they had named her Renee!

Today, I received another call from Koala Rescue with an update on Koala Renee, followed by the email below with exciting news…

I’ve just made a small donation to the fantastic work this not-for-profit volunteer organisation do and would encourage everyone to take a look at their website www.moretonbaykoalarescue.org 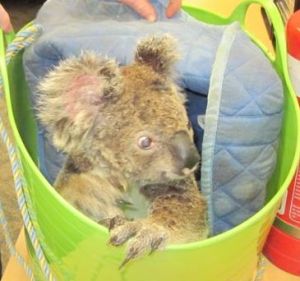 Thank you for rescuing the koala yesterday.  I have attached a few photos for you.  We will put a story on the website later today.  www.moretonbaykoalarescue.org

She was 4yrs old, bodyscore 5/10 and weighed only 3.7kg.  She wasn’t in very good condition and had previous mild trauma.  Otherwise looks like thanks to you she escaped being hit by a car, she was very lucky.

A little surprise as well – a 3-4 week old baby in her pouch.

One thought on “Koala Renee Rescue”