Cycling in the snow 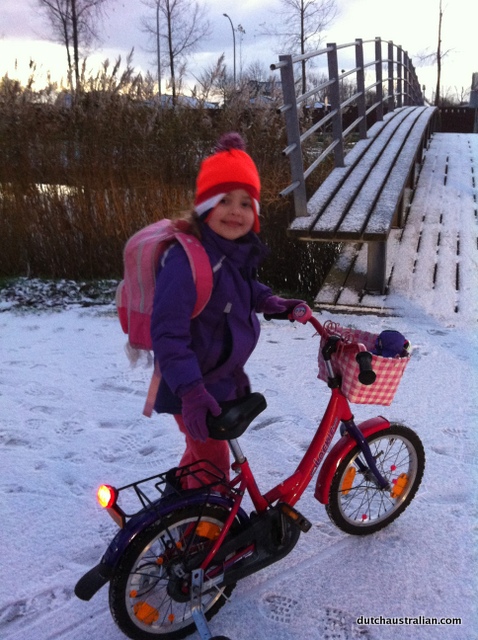 The day I have long-feared is here.  This morning, the girls and I cycled in the snow to school.  It actually wasn’t so bad.  Well it’s easier to write that now I’m sitting on the couch with a hot chocolate.

If you’ve not followed my story to date – we’re a family from Queensland, Australia who relocated to Den Haag, The Netherlands in July this year.  We live about 2km from the school, but I’m still working on getting my Dutch drivers licence.  My husband needs to leave long before school begins to get to work on time, so my only option to get the kids to school is walk or cycle.  This was fine in the summer/autumn, but almost since we moved here, I have dreaded how we’d cope in the winter.  Though not at all pleasant, we’ve somehow coped in the last weeks with the increasingly cold weather, and have even cycled through strong winds and pouring rain.  However until now, no snow.

Today was the big day.  Neither of my girls had ever seen snow, so were excited earlier in the week to have a little “preview” of what it was like with a bit of hail and a light fall, but this morning was the first day we’ve had a decent covering on the ground.  There wasn’t a lot in the backyard when we went outside at first, but it did look pretty on the red roof next door!  (and yes, it is this dark at 8am)

Just around the corner though, the playground was covered:

…as was the other playground nearby:

I was so proud of Sophia, she did complain she was cold a few times but still just kept cycling.  We walked over the bridge though as it was covered in snow.

I’m not yet exactly sure how or why (I think it has something to do with salt?) but the bike paths were clear and safe enough, we just had to avoid a few icy puddles.

We passed some sheep – and were a little jealous of their wool coats! 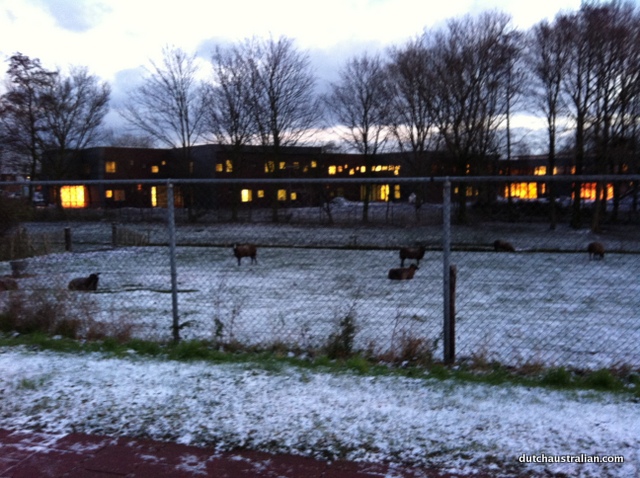 We were a few minutes late for school because of the extra time we took to marvel at the snow.  It also took a while to get all of Sophia’s gear off before she went into the class!

On the way back, I tried a different route – but this included cycling on a paved road and I found it was incredibly slippery with the compacted snow from the cars, so I headed back to the main bike path.  For the pick up this afternoon, I’ve tried to fix the bike trailer wheels so Isabella can keep warm and cosy in there instead of sitting on the back of my bike as she usually does.

My husband keeps telling me that cycling in this weather will make us tough and maybe it will.  I can’t wait until I have a car so I don’t have to –  though that itself will bring extra challenges such as driving in snow and the crazy traffic that is created when all the parents try to bring their kids to and from school at the same time.  Will just take it one day at a time but am proud that we managed to cycle in the snow today at least.  I’m really warm and cosy on the couch right now but have to drag myself out there again for school pick up….tot zo!