Recently I had to “take a plate” to share with staff at a multicultural lunch at Expatica.  So what could I make that was typically Australian and that I could make with ingredients readily available in The Netherlands?  Not to mention the fact I’m not a whizz in the kitchen, so needed something simple.  Aha, I thought – lamingtons!  Whether you’re familiar with these spongy chocolate and coconut covered cakes, or have never heard of them, it’s interesting to read a bit more about the history of lamingtons on Wikipaedia.

Though I am not a huge fan, they do have sentimental – and dare I say – cultural ties to my Australian heritage.  Anyone else remember lamington drives at school?  They were sold by the dozen as a fundraiser and our family would eat them for weeks!

At our wedding here in The Netherlands in 2007, it was very touching to see the chef at the North Holland hotel had made an effort to include “Australian food” on the buffet and the dessert included a version mini lamingtons.  Back then, I said to my (brand new!) husband that the chocolate drizzled on top of a tiny square of sponge cake, with coconut sprinkled on top was not much like the “traditional” huge cake squares totally smothered in chocolate and coconut.

However now, I totally understand why he made them that way – and in fact prefer them!  Firstly, a whole lamington is just a bit big.  Secondly, rolling sponge cake in icing and coconut is no easy task – trust the practical Dutch to come up with a more simple solution.

Here is my first effort at covering them in chocolate: 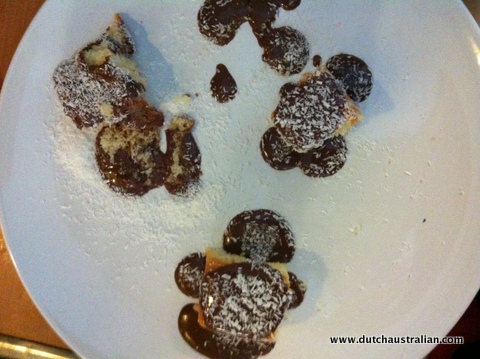 Then I thought, why not just drizzle and sprinkle…much easier and actually looks nice.

Oh as it turned out, due to heavy snow messing up train schedules, I missed the multicultural lunch – so this time, it was my girls eating lamingtons for days!

So here’s the step by step guide if you’d like to make some.  They are so easy, kids love to help.

I’m not a very careful (or tidy) cook, so I have very rough measurements!  Everything is readily available at C1000, Albert Heijn or other Dutch supermarkets and of course Woolworths, Coles and other Aussie ones.

1.  Cut the cake in half, then half again and make small cubes.

3.  Mix to a smooth paste.  It needs to be runny enough to drizzle but thick enough to not all run off the cake.  It will become more firm once you put it in the fridge.  If it’s too thick, add a little more boiling water (just a few drops at a time) or if too runny, some more icing sugar. 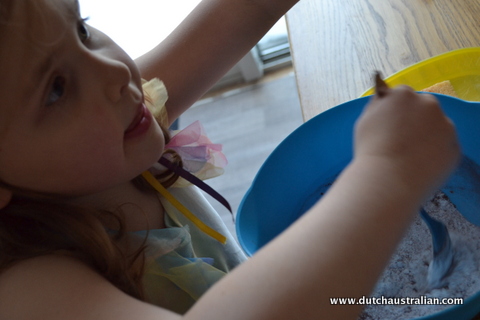 4.  Spread out the cake cubes onto a plate and drizzle a teaspoonful onto each.

5.  Quite quickly, before the icing sets, sprinkle coconut on top of each 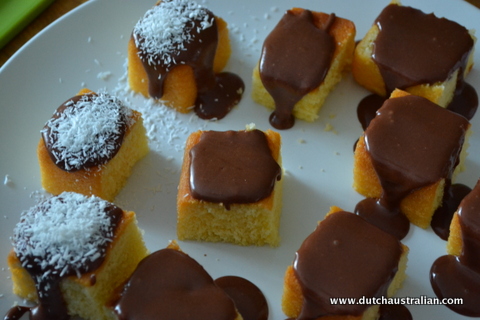 6.  Pop them into the fridge and let them set.  Then eat and enjoy 🙂

My clever little Dutch Australians actually came up with a great twist of their own.  Sophia (5) asked if we could sprinkle some muisjes on top!  (No, there are no babies in our house, we just bought these because the girls wanted to try them).  So here is a true Dutch Australian lamington:

We have some Dutch Australian friends coming over to help us eat them today and celebrate a snowy Australia Day here in The Hague.  Love to hear your comments – do you like lamingtons?  Have you tried making them?

I’m a Dutch Australian who enjoys sharing information of interest to those with connections to both countries.  You can read more about me here, browse the website  and connect with others on the Dutch Australian Facebook page.