This article was published in the June edition of the ANZWC (Australian & NZ Women’s Club) magazine.

Prague is a city I’d not yet seen but had been told I must by several people.  When I’d asked why, the response was generally along the lines of “it’s just a lovely city”.  I knew very little about it and was thrilled to say the least when my husband booked us a trip there recently to celebrate our 8th wedding anniversary.

I’m from Australia originally and my husband is Dutch and when we lived here together from 2002-2007 we used to really enjoy short city trips away to places like London, Edinburgh and Antwerp/Bruges.  Then, we moved back to Brisbane, had two children and city trips dropped off the radar for a while!  We moved back to The Netherlands in July last year and Prague was our first holiday since we’ve returned.  We left the children with oma & opa and had a really fabulous 3 day trip.   I now completely understand why others have highly recommended a trip to Prague.

We flew Easyjet for a reasonable price, leaving Amsterdam at 7pm and landing in Prague about an hour and a half later.  We exchanged some euros for Czech Crowns (CZK) at Schiphol first which was handy, as when we arrived we were able to immediately pay for the public transport in local currency.  It only cost 32 CZK (about 1.22 euros each) for a 90 minute ticket on the bus & tram into the centre.   You can also choose to travel by taxi or airport bus but we found the public transport to be reliable and comfortable as well as throwing us straight into the “local” experience!

My first impression of Prague – gleaned mainly from the public transport and tram stations – was that I’d stepped into the 1970s.  However as soon as we arrived “above ground” from the station I was captivated with this gorgeous city.  It was like stepping further back in time into a medieval fairy tale.  Well, if you ignored all the modern advertising, lights, and cars of course – but as soon as I saw the stunning skylines, all of that faded into insignificance!

We spent the next 3 days wandering around this amazing city.  Though I’m already known as being a keen photographer, I think almost any tourist becomes rather overwhelmed with the stunning detail in almost every building and finds themselves clicking crazily!  Thank goodness for digital photography – you may just need to pack a battery charger and extra memory card.  (Power plugs/source are the same as The Netherlands).

Residence Bene was the accommodation my husband had chosen, which was basic but clean and central.  We walked everywhere and were glad to have packed comfortable shoes as the cobblestones are pretty, but can be tough on your feet.

On the first day, we walked a few minutes to the stunning Old Town Square and soaked up the atmosphere around the amazing Astronomical Clock.    We were fortunate to have two bright, sunny days, which apparently is almost as rare as it has been in The Netherlands!  We became part of the busy crowd, listening to languages around us from all around the world, browsing the gift shops, watching the tour guides vie for business and loving the sounds of the old-fashioned church clocks and clip clop of police horse’s hooves on the cobblestones.

Next, we visited the Old Jewish Cemetery.    This wouldn’t have been a personal choice but my husband had heard it was somewhere special and was interested in the history.  It was a really moving place I’m glad we had the chance to see,  with the oldest gravestone dating back to 1439 and the last burial taking place in 1787.  We learnt both fascinating and tragic stories tied to that specific location and the surrounding Synagogues.

That afternoon we joined the Prague Castle Tour, which leaves the Old Town Square at 2pm with Discover Prague.  You don’t need to pre-book these tours, just look out for the guides with the bright yellow umbrellas or pick up one of the many tourist brochures for more information.  This tour cost 250 CZK (around 10 euros) and was excellent value.  For three hours, we had a charismatic local guide take us across the river and share interesting information about the stunning castle district.  There were several moments on the tour that were literally breathtaking, including walking into the St Vitus Cathedral.  Photos just don’t do it justice. 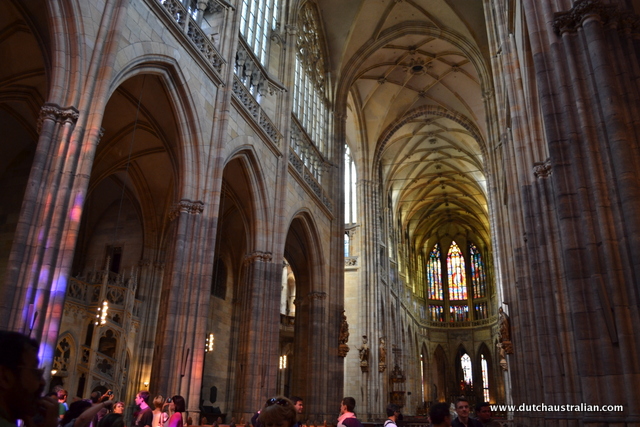 Afterwards, we tried a local dinner at a cosy pub/café near the picturesque Charles Bridge – roasted duck and pork with cabbage and dumplings.    We thought we’d stop back at the hotel for a rest before heading out for some of the cheap cocktails advertised around the city – but were so exhausted after such a big day of exploring we fell asleep early!

The next day, again we had lovely weather and started out with another Discover Prague tour – this time of the “other side” of the city.  This is actually a free tour, where you can instead just pay by tip at the end (without any pressure) and we had a sweet Czech Australian guide!  She was born near Prague, then her family moved to Melbourne and she’s now living back in the Czech Republic with her Czech husband and two children.  Again, we were treated to glorious and tragic stories and sights of this amazing city.

That afternoon, more wandering and soaking up the sights and taking countless photos.  There were plenty of multicultural meal options – we had sushi for lunch and ate at an Argentinian restaurant for dinner.  Afterwards we watched the sunset over the river and tried some of the famous Czech beer at the Prague Beer Museum.

On our final day, it was raining heavily and the city certainly lost a little of its charm while we were huddled under an umbrella and slipping on wet cobblestones.   However we still enjoyed checking out a few more churches and wandered a shopping centre, then in the afternoon made our way to the airport for our flight back to Amsterdam.

Now I can also join the chorus of visitors who say just how lovely Prague is and I’d highly recommend a few days there!

You can view my (hundreds!) of photos over on my Google+ Prague album.