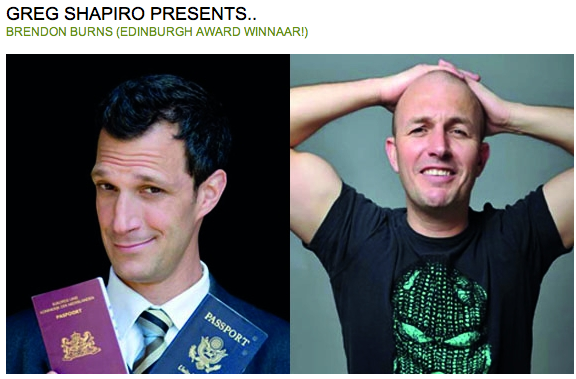 Brendon Burns is an Australian comedian touring the Netherlands shortly as part of the “Greg Shapiro presents…” series.  I had the pleasure of talking with Greg recently at the Feel At Home in The Hague Fair, and bought his great new book “How to Be Orange“.  Hilarious and a separate blog post coming soon.

Back to Brendon.  Between Thursday 3rd October and Friday 11th October 2013 there are eight shows throughout The Netherlands – Rotterdam, The Hague, Amsterdam, Almere, Utrecht and Enschende and Eindhoven.   “Brendon Burns is notorious for his scandalous shows and unapologetic views whilst remaining intensely and oddly lovable,” explains the promo material and I think the video below gives a good example.   It’s a great observation of the Dutch through an Australian’s eyes – and I love that it’s complete with both accents.  Not for the feint hearted but very perceptive:

A regular at the Edinburgh Fringe Festival since 1996, he won the top prize there in 2007 and has a long list of performances and live recordings.  If you’re an Australian in The Netherlands, now’s your chance to see him perform in October. You can see the full Greg Shapiro presents Brendon Burns schedule and order tickets here.