As I type this, The Netherlands are playing their final match in the 2014 World Cup – or WK (“Way Kah” as I’ve overhead in countless conversations in the last month!).

I am terribly under-qualified to write a sports post.  You may notice a distinct lack of sports coverage on this blog…if it’s something you’re passionate about you’d be most welcome to submit articles!  I don’t play or watch any organised sports and neither does my husband.  Considering that both The Netherlands and Australia both seem to be fairly sports orientated nations on national and the world stage, I suppose we should (literally) up our game.  As it turns out, it seems our little Dutch Australian is getting an early sports education at school though so she may still save the family at some stage!  Here’s a range of the things she’s brought home from school recently…. 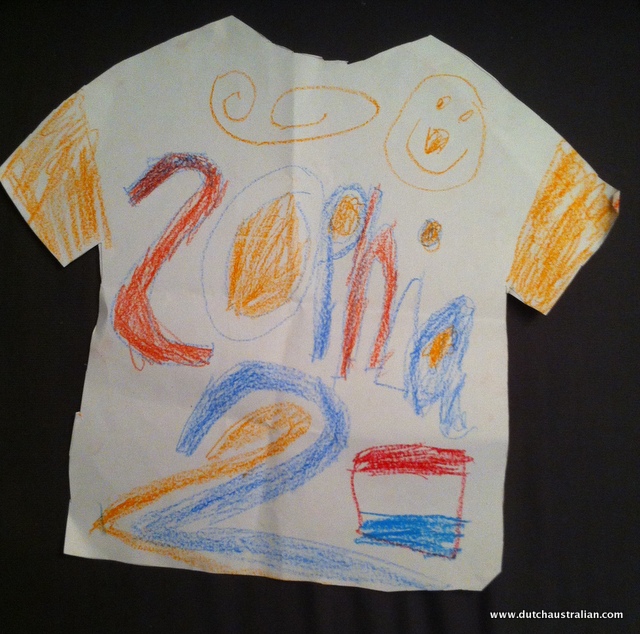 From a Dutch Australian cultural perspective though, I have actually been taking lots of orange photos for more than 2 months now with the intent of writing a WK/World Cup post, but haven’t had the chance until now! One very valid excuse I have is that we recently moved house, and though this time it was only 1km down the road instead of across the world, anyone who has recently moved will understand how time intensive it is.

It also turned out that the World Cup was the focus of one of the first conversations we had with our new neighbours.  I’d mentioned that I was originally from Australia and also had said something about our new t.v. connection not working properly….the evening that Australia and The Netherlands were playing, they kindly came over to ask if we’d like to watch the match on their t.v.!  As it turned out, we’d figured out a temporary solution by connecting the t.v. directly to our modem in our “meterkast” – so we watched the match in our hallway.

What has amazed me is the commercial creativity surrounding the World Cup.  I know that orange is already a pretty popular colour in The Netherlands, certainly in April each year, but this has been taken to new extremes in the last couple of months.  I’m not over exaggerating to say you cannot walk for more than a minute around the shops or in the suburbs without encountering an orange burst. From the fairly unimaginative t-shirts and orange wigs to the outlandish sparkling dresses, lion statutes and so much more, you can take a flip through the photos I took of catalogues and displays in the Dutch Australian Facebook Album (click on the photo below):

There were also a number of images doing the rounds on Facebook on the day of the Australia vs The Netherlands match which are also in this album.  As it turned out, it was a great game – though we only watched about half of it as we all got a little bored (sorry to the die hard fans!)…but it did seem that Australia held their own and the goals were fairly well balanced throughout the game, so us dual nationals could be proud either way! 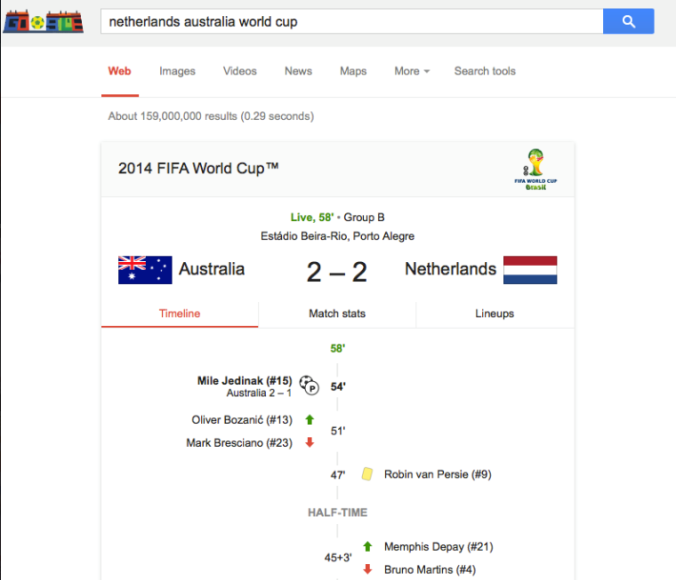 So right now, it’s half time between The Netherlands and Brazil to determine 3rd place and it’s 2-0 in favour of NL.  It seems the fans in the suburbs are a little less enthusiastic this evening…we only heard faint cheers when goals were scored.  Unlike when The Netherlands have won matches, particularly against Costa Rica when we were woken by shouting and fireworks at 1am.  Personally, I would have been disappointed if NL did win the grand final – as we bought our new (rather expensive) TV at Media Markt a week after the promotion that if NL won the WK finals, you’d receive a full refund on your TV.

I have to say, I’m also little disappointed to now be watching the match and after all that orange everywhere in the shops, they are wearing BLUE!

From the photos and videos others have shared, it does seem that the atmosphere of public places in The Netherlands was pretty amazing when NL scored.

As you are no doubt aware, The Netherlands lost their chance at the grand final when they were beaten by Argentina, Queen Maxima’s birth country.  Clever piece of social media shared on the evening of that game:

Did you watch each WK/World Cup match intently or did you get easily bored?  Did you wear something orange?  What was it like in Australia?

2 thoughts on “2014 World Cup Craziness in The Netherlands”