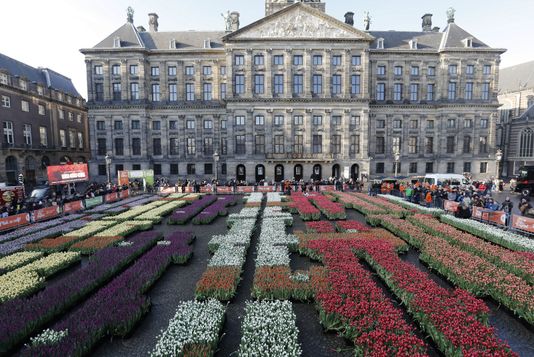 The new season for cut tulips has begun, attracting attention from around the world. On Saturday 21 January, Dutch tulip growers (TPN) organised the sixth annual National Tulip Day. The highlight was the picking garden of 200,000 tulips in the heart of Amsterdam, where members of the public could pick tulips free of charge. According to TPN President Arjan Smit, ‘National Tulip Day has grown into a world-class event, with around 17,000 international visitors each year. It also attracts a great deal of attention from the national and international press, and tulips have been a trending topic on social media. We could not have imagined a better start to the tulip season’. The theme for National Tulip Day was ‘Dutch Design’, as expressed in the garden design by Floris Hovers. Tulip Day was also celebrated enthusiastically at other locations in the Netherlands. Hundreds of florists and garden centres organised tulip workshops and demonstrations.

Dutch tulips make their way to florists, supermarkets and specialist shops around the world. In 2017, tulip production in the Netherlands will break the boundary of two billion for the first time. Last year, the production of cut tulips amounted to 1.9 billion, with an export value of €250 million. In recent years, tulips have gained considerable popularity due to their high quality, uniformity, expanded assortment and sustainable character. Dutch tulips are currently cultivated primarily in water instead of in potting soil, without the use of chemicals. In addition, the amount of energy used in tulip production is very low in comparison to other flowers, and it continues to decrease each year.

The first National Tulip Day was in 2012. Held on the third Saturday of January, it now marks the start of the new season for cut tulips each year. Throughout the season, which lasts until the end of April (about 100 days), more than 1,000 different varieties of Dutch tulips are available around the world, ranging from bright yellow to dark purple, from lily-shaped to fringed and from two-toned to double-flowered. Tulip Day is an initiative of TPN.

On 23 March 2017, Keukenhof will be opening its gates for the 68th time. When it closes eight weeks later, some 1 million visitors from across the world will have visited the international flower exhibition. As such, Keukenhof makes a contribution to tourism in the Netherlands. Keukenhof now has a hundred flower bulb growers supplying bulbs to the park and five hundred flower growers participating in the flower shows.